Illusions are endlessly fascinating. We love to be fooled, but why?

I think it’s because deep down, illusions don’t simply mystify us, but inspire us. An illusion represents a conflict; a contradiction. It not only suggests that the same thing may be true or false, but, more importantly, that it can be both of true and false at the same time.

Look at this classic drawing “Waterfall”, by the Dutch artist M.C. Escher: 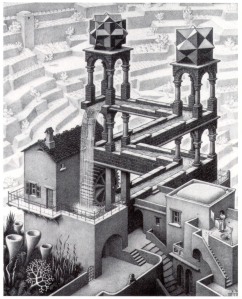 Is the water flowing up or flowing down? It appears to be doing both at once.
I had trouble building this ever-ascending staircase in my house: 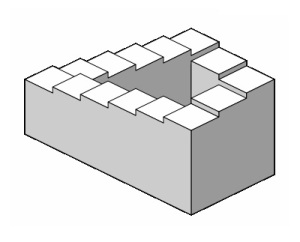 This guy was trying to straighten out the Tower of Pisa – too bad he was kicking the wrong side: 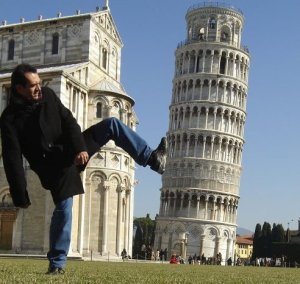 I’d love to see the tools that made this lovely ring sculpture. I could probably make one of these myself, if I find some hyperbolic space lying around: 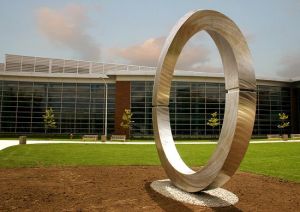 Don’t worry – it’s safe to swim in this pool. The creatures are part of the pool’s floor tile pattern. Yes, really. 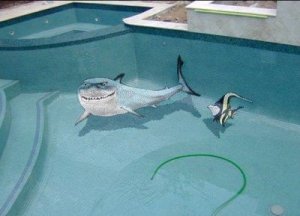 Here’s a photo of some construction workers at a nearby park. They’re very handy guys because they can work in up to 11 dimensions: 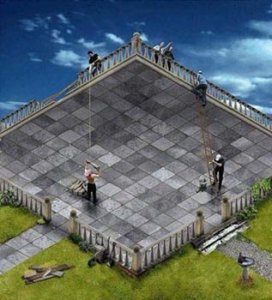 Either these wheels or my head are spinning:

Wow – I didn’t know they could breed horses so small. Must be that new-fangled generic engineering we keep hearing about:

Illusions are paradoxes, as is information development itself. Look at what a technical writer has to do:

This last point is a key point. What exactly are we saying to users when we tell them to “Click the OK button”. There is no button, but only a visual representation of one. They do not actually “click” the button. They move an external pointing device, which in turn moves a cursor in a somewhat corresponding way on a screen, then they position this cursor over a virtual button and click, not a button on the screen, but the button on the mouse.

Lest you think I’m being picky, try explaining how to use a computer to someone who has never seen one. It is a damn near impossible task. I actually remember the first time seeing someone use a computer. They had tremendous difficulty manipulating the mouse. We take it for granted, forgetting that we too had a steep learning curve.

We often become frustrated with our users and say (or want to say) things like:

MindFreak
All of the illusions presented so far are interesting, but none are anywhere near compelling as the final one I will share with you. It is, quite simply, the best illusion I have ever seen, because it pushes the very limits of reality and perception.
Look closely at this checker board: 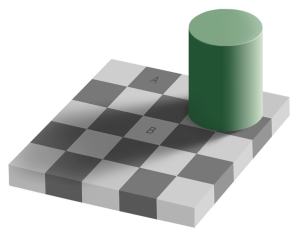 You see a dark square marked A and a lighter square marked B. Except there’s just one little detail:
A and B are the same colour.

I’ll say it again in case you didn’t quite catch that: A and B are the same colour.

(It’s situations like these that the word “flabbergasted” was invented.)

I know what your thinking: “A is obviously darker than B. Come on! Are you (colour) blind?!”
I agree – A and B do appear to be different colours, but they are the same, and here is the proof: 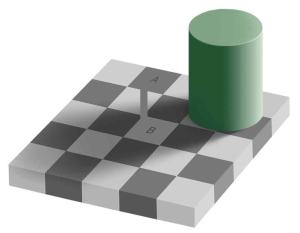 What? You still see them as two different colours? But I just proved to you they are the same colour!

At this point, I have to tell you:

Reality – What a Concept

An illusion like this makes the following mathematical statements:

This, of course, is impossible, and that is exactly what this illusion, indeed, all illusions are saying, that the impossible is quite real. If visual impossibilities can exist, then how much more so can informational impossibilities and paradoxes exist, for pure information is much less tangible and more ethereal than anything visual.

Being a technical writer means being the ultimate illusionist. We make the intangible tangible, the complex simple and the impossible possible. We pick the rabbit out of the hat while everybody sits out there wondering how the hell we did it.