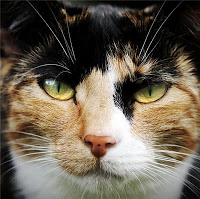 I’m not a cat lover, except for Schrödinger’s cat, a mind-bending paradox proposed by Austrian physicist Erwin Schrödinger in 1935:

Imagine a cat is placed in an opaque box with a container of radioactive material and a vial of deadly poison gas. Quantum mechanics states there is exactly a 50% chance that an atom in the radioactive lump will decay and release an electron. If this happens, the electron will strike the vial, causing the gas to leak out and kill the cat.

Now, because we can’t know for certain if the gas has been released, the cat exists in an uncertain state: it is both alive and dead at the same time, which is of course, impossible. But it would theoretically be true, if we could build such an experiment.

Schrödinger was trying to show the absurdity of quantum mechanics, one of the strangest areas of physics. Quantum mechanics assigns probabilities of existence to subatomic particles, leading to strange worlds where a single particle can be in two places simultaneously, or in no place.

Quantum mechanics may represent the truth at a subatomic level, but, as Schrödinger’s cat shows, it becomes absurd when applied to the visible world. Instinctively, we want to believe things exist in a certain state. Even the most ardent cat-hater would rather know the cat is alive than not know either way.

The lack of certainty is at the core of this paradox. I have previously shown that a document can exist in a quantum state. That is, the state of a document can be unknown, for example:

However, what should never be uncertain is whether the user is uncertain about the contents of the document. Whatever topic the user reading, we must be sure that the user completely understands it.

How do we create such certain documentation? The same way as with any other user-friendly product: by showing it to as many users as possible and seeing if they understand it. Documentation testing creates guides that are comprehensible rather than reprehensible.

A user cannot simultaneously understand and not understand a topic. A user either comprehends your document, or they do not.

To put it succinctly: there can be no Schrödinger’s User Guide.