In part one, we looked at relativity’s laws regarding motion, gravity, and light. Part two will explore the connections between mass, energy, space, and time.

It’s all about ME (Mass and Energy)

Everyone knows e=mc2, Einstein’s famous equation uniting mass and energy. This formula indicates that a small amount of mass contains a tremendous amount of energy.

Atomic weapons graphically illustrate this: a small amount of unstable, radioactive material is forced to rapidly decay releasing a huge amount of energy in a massive explosion. Nuclear power plants do this on a kinder, gentler scale, but the principle is the same: mass contains energy.

To state it another way: mass (or matter) is solidified energy. These are the two states of existence for everything in the universe.

Information development also consists of two states: (subject) matter and energy. Energy is comprised of the effort required to develop information, including: researching, interviewing, analyzing, testing, writing, editing, updating and managing. All this energy is then channelled to produce a piece of subject matter.

Time for some space

Relativity states that space and time exist together in a single frame of reference known as the space-time continuum, or simply spacetime. Spacetime is made up of the three dimensions of space, and a fourth dimension of time. Einstein showed that extremely massive objects can bend not only space, but also time, showing that the two are inextricably linked.

All informational objects occupy a point in space, the space being the medium the object resides in: a printed page, a PDF, a website, and so on. But these objects also reside in time: when a user closes a book or turns off or away from the computer displaying the information, the object ceases to exist, if only temporarily.

If we could observe an object traveling near the speed of light, we’d see three incredible things happen:

On the last point, if the object was a clock, we’d see it moving more slowly as time passed at a slower rate. However, from the perspective of the object, time would be passing at a normal rate. This effect is known as time dilation.

To illustrate the power of this, imagine if you were traveling near the speed of light and looked back on Earth using a powerful telescope. You’d see everything moving more rapidly on Earth, as though it was on fast-forward. You might later return having only experience a few days passing from your perspective, but returning to an Earth where hundreds, or even thousands of years have passed – a one-way time trip into the future.

These three remarkable transformations have been confirmed by science. They also explain why relativity states that nothing can travel faster than light. If an object could travel the speed of light, it would shrink to nothing, time would stop completely for it, and its mass would be infinite. To accelerate something to the speed of light requires an infinite amount of energy, which the universe simply does not have. 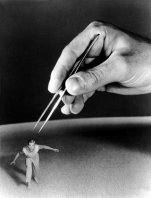 The incredible shrinking communicator
As an informational object is developed, it moves through the information development process. It starts out large in size and scope, consisting of many internal notes, documents, functional and design specifications, emails, phone calls, interviews and other meetings.

As the object accelerates through the process, much of the excess information is edited away. The information object shrinks in the direction of its motion, arriving at its final form: practical, relevant, and smaller.

Instead, mass refers to the substance, practicality and meaning of an information object. The greater the mass, the more valuable the object is to the end user.

Again, as an information object moves through the development process, its mass increases, even though its size decreases. In fact, it is precisely because its size has shrunk that its mass (informational value) has increased, because all the non-relevant pieces have been vaporized.

Slow down, you move too fast
The slowing down of time does not apply directly to information objects, because these objects cannot experience time – only people can. Therefore, the time dilation effect applies to the people involved in the documentation process, primarily the technical communicators.

When a technical communicator moves an object through the information development process, they are intently focused on the development of its content. The communicator’s perception of time changes. Were we to observe the communicator, they might even appear motionless, as though time had stopped or slowed down for them. However, from the perspective of the communicator, time progresses normally. It is only when they stop moving through the process (when they take a break) that they realize that many hours may have passed.

The end user experiences a similar distortion of time when they are so focused on reading a topic that they also lose track of time. However, the effect is not as pronounced, because it requires much more energy to create information that to consume it. When we create information, we imagine all the paths it might take, and will often experiment with different wordings and formats. The end user only sees the one final, simple path.

Who broke my Time Machine?!

Returning now to the original discovery of particles that can travel faster than light: one of the reasons scientists are skeptical about this claim is that if such particles existed, they would travel backwards in time. These types of particles have already been imagined and are called tachyons.

The solution involves not tachyons but taxonomy, the art and science of classifying information into a format that a user can understand and access. This means:

My Crazy Relatives
It’s not surprising that documentation has much in common with the theory of relatively. All documentation is relative, because each user brings to each document their own perspective, knowledge, experience and bias. No two users see the same document the same way. Each document, therefore, appears differently relative to each user.

As we’ve seen, it’s impossible for almost anything to travel anywhere near the speed of light, including our users. But with clear documentation, we can enable our users to see the light.