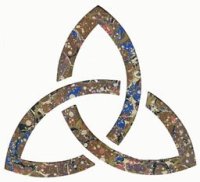 People are innately drawn to things in threes; to objects in triplicate. There’s the classic Christian trinity, where God is divided up neatly into three parts: the father, the son, and the holy spirit. But there are many other trinities:

In addition, Starbucks Coffee developed the idea of “the third place” outside of home and work, where one could simply relax while drinking $6 lattes. Clearly, people are attracted to threesomes, but why?

It could be that three represents a careful, comforting and symbiotic balance. While it’s true that just two things can “balance” each other (picture two equal riders on a see-saw), extending the number to three seems to add that extra element of desired symmetry. Each of three balances out each other in a psychologically pleasing way.

DITA, an XML markup language that is revolutionizing how content is stored, created and managed, also uses a trinity. In DITA, all content is stored as individual, modular topics. There are three basic DITA topic types in which all content can be classified: concepts, tasks, and references.

Now, what’s very important to remember is that you should never mix the content of each of the parts in this holy trinity together, for you will surely burn in content management hell.

You can see, therefore, that this trinity of topic types covers all your information needs.